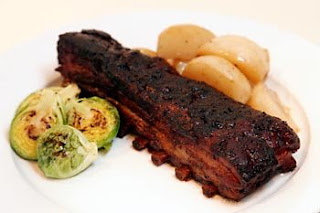 Rebekah Denn has been nominated for a James Beard award for a story about Wooly Pigs and Mangalitsa.

The Seattle P-I, her former emplyer, recently transformed itself - eliminating all the food staff. She's now blogging at Eat All About It.

Here's what she wrote about Mangalitsa belly - pictured above, in a piece entitled, "Mangalitsa Madness: Porcine Foie Gras":

This fat-laden cut -- belly with some small ribs -- is sinfully rich and salty-sweet. By the time it left its slow braise and joined some glazed turnips and Brussels sprouts on the plate it was practically pork candy, or the pig equivalent of foie gras. It was so tender and moist it fell apart at the touch of a fork.

Dining on any more than a small square of the meat would overwhelm any rational appetite -- the serving shown in the picture, I realized after taking a few bites, would feed two or three. The foie comparison carries over to the serving size. It makes buying a cut of the meat seem less out of reach at $25/lb; the hit isn't so painful when a pack can provide several servings.

I am not usually one to eat the fat off any form of meat. It tastes foul, the texture is rubbery, and it's terrible for your health. With the melting mouthfuls on this young pig, though, I get how people can nibble at it until their lips glisten.